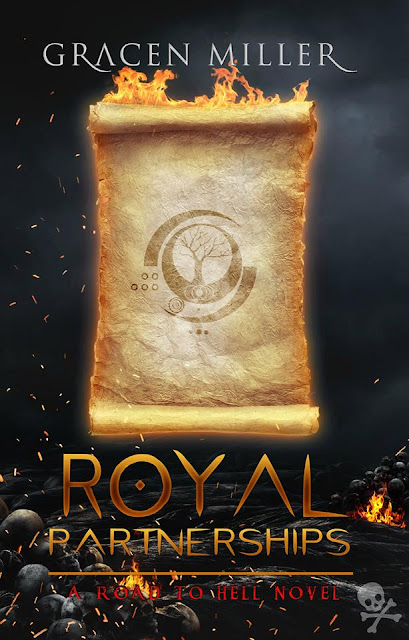 BLURB:
“Royal Partnerships”
Book 4 in ROAD TO HELL series
(series must be read in order)

It’s good to be the Queen…

Having ascended the throne of Hell, Madison Wescott is finally able to breathe a sigh of relief. Though she has embraced her demonic nature, she has ensured the safety of everyone she loves. With both Micah and Nix at her side, she wields more power than she could have ever imagined.

But not even the throne is safe when you rule in Hell.

In the wake of a failed assassination attempt, Madison learns about a realm of the damned older than Hell itself. A fierce and powerful incubus vows to escape his imprisonment there — and his efforts are weakening the bonds that hold him and countless other monsters at bay. With no plan and nowhere else to turn, Madison contacts an unlikely source for help. But whose side is he really on? Will he help preserve her reign, or bring about Hell’s downfall? 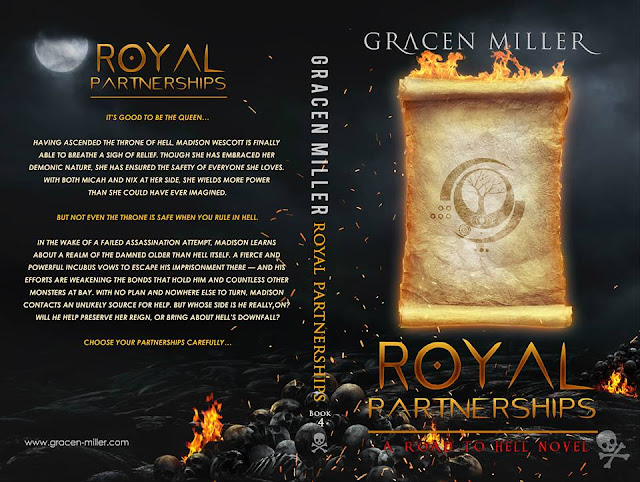 “Collecting and torturing a soul is dangerous business, my sister,” Zen said.

“So was becoming Queen of Hell. What’s problematic about going with the flow?”


More of the same unblinking stare from him. “If you go rogue, Madison…”

Madison slammed against the window-wall behind her. Despite the pane’s solidness, she felt it shimmy when it received the brunt of her weight. Recognizing Zen’s new demonstration of power, she elevated her eyebrows at him. With a smirk, she rubbed her back against the glass. She palmed her dragon blade as she flung a ninja star. He leaned to the side, dodging the star with ease. Of course she missed.

Only his creator could take him down.

Madison palmed her other dagger and eased away from the window. “Is this you coming for me, Zen?”

His one-shoulder shrug sufficed as an answer. The pounding on the door, followed by Nix and Micah’s yelling further answered her question. Zen had magically locked them out. That’d been why she saw his power flare for a brief second during their conversation.

She went for him. He blocked each jab and slash. Every kick and punch. She eyed him as they circled one another.

He toys with us, her demon remarked.

Of course he does, that was Zen’s way when they sparred.

“Have I not taught you anything?” He smacked her across the cheek in a whip-like move she hadn’t seen coming. It wasn’t hard enough to hurt, but the blow stung all the same. “You tire yourself knowing I’m the superior fighter. It’s like you sacrifice yourself to me. Too easy.”

They went at it again. She tripped over a rug, stumbled backward, and came up dead-footed with her spine against the windowpanes. He moved into her space. Eye-to-eye they stared at one another, her panting the only racket in the room.

“So this is how it all ends?” she asked as he elevated a hand and braced it against the glass next to her head.

The door practically throbbed from all the kicking, pounding, and magic thrown at it. “You’re scaring my men.”

“They should be terrified.”

Madison settled her hand on his arm. “I trust you.”

She chugged his magic harder than she ever had anyone’s, and screamed as pain slashed through her head. Zen’s eyes widened, silver bright, and he jerked away as his magic held strong, barring her husbands from the room.

Zen stumbled, his footing off, and he swayed a moment before going to a knee. Wincing as the pain receded, Madison circled him and secured her blade in its leather holster.

She threaded her fingers in his hair and pulled his head back. His shallow breathing surprised her, “Concede defeat?”