All I have to say is this. Be happy you can't see the dance I'm doing right now.  It probably looks much scarier than I think it does. LOL! Four weeks in a row! Today's teaser comes from Journey, the second book in the trilogy.
Enjoy and stay safe!
:)  Mireille 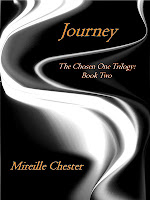 “Until we have positive proof that we are in danger, I refuse to send my men to their deaths.  Rainen won’t wait to hear what we have to say if we go knocking on her door.”
“Positive proof?”
I could feel Jasper tensing beside me.  I put a hand on his leg.
“What more proof do you need?  Hayden was there.  They used her to kill six shifters.  Had Brice not helped her escape, we wouldn’t even be here having this conversation!”
“Jasper.”  I said his name softly and his glare honed in on me.  He blinked.
“She doesn’t think you can do it.”  He looked at Melana and nodded to himself.  “You don’t believe that Hayden is powerful enough to do what Braw wants her to do.”
Melana stared back at him.  “You’re right.  It’s not that I don’t think she doesn’t have the magic or the power.  I don’t think she has the control.”
“That’s exactly why Braw will succeed if he gets a hold of her.  Because she is powerful enough to project to as many beings as he sees fit and because she doesn’t have the control she could have.  When it starts to project from her, she can’t stop it.”
Melana looked at me and frowned.  This was obviously an angle she hadn’t thought about.
I looked up at Jasper and, not for the first time since we had met, thought it would be nice to be able to feel what he was feeling.  The muscles of his jaw were clenched, his eyes slightly narrowed.  He was staring out of the window.  He looked down at me and his eyes softened.
“A shlova yan,” he whispered before kissing me softly.
“A shlova yan jer.”
My usual response was answered with a sad smile.
I frowned.  “Want to take a walk?”
He took my hand and we left, much to the shock of everyone in the hall.  We walked in silence as Jasper led me through one hallway, down a few more, until we came to a solid wood door.  He pushed it open and we stepped out into a beautiful garden.
Still quiet, he walked down the path until we reached a pond filled with large fish.  He sat down, pulling me down so that I was in front of him.  I leaned back against his chest, loving how safe it felt wrapped in his arms.
He took a deep breath.  “Why are we doing this?”  The question was just a whisper.
“What do you mean?”
“I mean why are we here, convincing Melana to team up with Damian?  Why are we going to Howel?  If we actually get to talk to Rainen, what happens if we can convince her our plan is best for everyone?  Do we just march up to the Northern Regions and call Braw out?  And if he does come out, then what?  It will be you and him, won’t it?  There’s not much the rest of us can do so long as that staff is around.”
“I…I guess I hadn’t thought that far ahead, really,” I said, more than a little rattled.  I had never heard Jasper talk like this.  To him, a fight was a fight and he always went into it knowing he was going to win.  “What’s going on?  This isn’t you.  I have never seen you turn back from a fight.  I’ve seen you finish fights when others would have surrendered.  I’ve heard the stories, Jasper.  You’re legendary.”  I hugged his arms tightly.  “What’s wrong?”
He was quiet for a moment.  “When they killed my family, they may as well have killed me, Hayden.  I was fourteen when I killed my first man.  I wasn’t even of age.  All I could think about was what he had done to my mother, my father, my sister and my brother.  That was all that I could see.  Luke found out who they were and we took care of them.  I spent the next sixteen years doing the same.  I don’t think I was alive.  I died that night.
“I never worried going into battles.  I never cared what would happen if I jumped into an ambush.  How could I die if I was already dead?”
I reached a hand back and pulled his head down so that it was against mine.  His arms tightened around me.
“But then one day, I looked down a hill and saw this most beautiful woman.  I looked into those unbelievable eyes and my heart jumped.  When you kissed me by the lake it started to beat again.  You’re the one who brought me back to life, Hayden, and now that I’m alive again, I’m terrified.”  He swallowed hard.  “If we crossed over, it would be done.  The Majs and the Namaels would still be fighting and the humans would be doing whatever it is they do up there.  No one can do anything drastic without you.”
His hand found mine and started to play with the gold band around my finger.  “I want to know why I am about to risk losing the only thing that matters to me for a bunch of beings who only want you as a weapon.”