The Dion Series by M.E. Franco gets a new look!!!

The paranormal romance Díon series by M. E. Franco has a new look. Here is a peek and the new covers.

Where Will You Run? Book One of the Díon Series 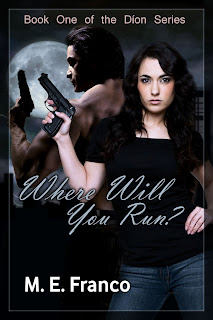 As a San Francisco homicide detective, Mari Lucas was used to calling in favors to get her sister, Kerry, out of trouble, but this was the last straw. Instead of her usual minor brush with the law, Kerry landed herself in a locked psychiatric ward rambling about vampires who were out to get her. Working in San Francisco, Mari had seen a lot of crazy things, but vampires? Maybe Kerry had finally lost her mind.

But when her sister goes missing from the secure psychiatric facility, Mari is forced to investigate her disappearance along with a disturbing increase in missing persons cases among the homeless population. Forced to work the case with an outside detective, Mari will stop at nothing to find her sister. But what she finds will change her life forever.

Where Will You Hide? Book Two of the Díon Series 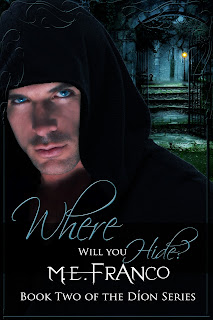 When a blood thirsty draugr terrorized his village, Reinn Gunnarson had no choice but to gather some men and follow the creature to its lair knowing they would never return. Mortally wounded, Reinn awoke to find the gods had cursed him to the same fate as the evil he had fought so hard to destroy – a draugr. He isolated himself inside the creature’s castle away from humans. This had worked well for over 1000 years until one rainy night when Kylee Shanon, a stubborn, foul mouthed woman knocked on his door looking for help, unaware of the danger within.

After escaping Raith Macrae and his team in San Francisco, Christopher Collins set up shop in a new location in Europe. A mistake by his men led to the discovery of a legendary draugr. Collins had heard the stories of how draugrs were hunted to extinction by the Díon because it was too dangerous to allow even one to exist; but if he could control it, he could use it to kill Raith and bring Mari Lucas back to his side where she belonged.

When Reinn is forced to carry out Collins’s plan, a twist of fate gives Raith the chance to catch Collins while keeping Mari and his team safe. To do this; he will have to trust Reinn, a draugr. The type of creature Raith had been created to kill.

Author Bio:
M. E. Franco lives in California with her husband and children. She works as a Behavior Analyst Consultant during the day and writes in her fantasy world at night. Besides writing, she enjoys reading, playing outside, music, and chocolate. See what she's up to at www.mefranco.com.