Hello, my patient readers!
Just as promised, here's the first chapter of Displaced!

Kendall lay by the creek, his arms behind his head.  It was a perfect day to lie around and do nothing.  He stretched and yawned; the perfect day to be lazy.  It was one of the things he loved to do most since the war with Paradin was over; relax.  It had taken a while to get to this point.  For months after they’d returned home from fighting, he’d had nightmares of the events that had taken place.  The beings that had been injured, killed… all because of one deranged human.  He remembered the agony engulfing his body as Laif’s magic had started to rip his tiger out of him.
He shivered then inhaled deeply to help rid himself of the thoughts taking over his mind.  Peaceful.  Things were peaceful now.  Braw was dead and the staff of Laif had been destroyed.  Things were quiet now.  Other than the odd human rogue stirring up trouble here and there, there hadn’t been much to worry about.
“Kendall!  Are you here?”  Brice’s voice drifted out of the woods towards him.
He sat up with a good natured groan which turned into laugh.  “How are you doing, mate?” 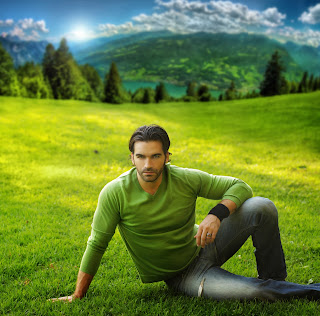 Brice grinned.  “I’m well.  You?”
“I can’t complain.  It’s a beautiful day.”
His friend nodded.
Kendall brushed shaggy black bangs out of his light blue eyes.  “What brings you out to these parts?”
“I’m on a recruiting mission.”
Kendall stiffened.  So much for peaceful.  “What happened?”
Brice chuckled.  “Relax. Everything is quiet.  Hayden is looking for volunteers to practice her displacement spell on.”  The blond man grunted.  “I was her target yesterday and I just managed to rid myself of the headache.”
Kendall laughed.  Poor Hayden.  It didn’t matter that she was the most powerful sorceress in Quelondain; the poor woman was never going to master the displacement spell.  “I suppose I could take the brunt of it this time.  You’ll owe me one.  I had plans today.”
“Oh?”
“I was planning on staying in this exact same position until supper time.”  He stood and stretched one last time before shifting into his tiger.  He cocked his head at Brice to lead the way.  His friend smiled, shifted into his leopard then bound into to the woods toward Hayden and Jasper’s cabin.
“Uncle Kendall!”
He shifted in time to catch Emma in his arms as the six year old threw herself in the air.
“Hello, Sweetling.”  He gave her a hug then boosted her onto his shoulders.  Nina and Daniel, Hayden and Jasper’s other two adopted children, ran to give their own hugs in welcome.  “Is your dad home?”
Nina shook her head.
“Mamma!  Uncle Kendall and Uncle Brice are here!”  Daniel shifted into his wolf and loped to the house in case Hayden hadn’t heard him.
Hayden stepped out of the house, her long dark brown hair pulled back into a pony tail.
“Brice!  I told you to stay home today.”  She mock glared at her friend.
“Aye, you did, but I’m fine.  Really.  The headache is gone.”  He smiled and pressed his lips to her forehead in reassurance.  “I brought you another test subject for the afternoon.”
Kendall grinned and pulled her in for a hug.
She looked up, frowning.  “Are you sure?  You were sick for three days the last time I tried displacing you.”
He shrugged.  “Brice tells me you’ve gotten better since then.  I’m sure I’ll be fine.”  Sick was quite the understatement.  He’d been in bed, fevered, throwing up, with his head pounding for a full three days before the effects of Hayden’s magic had let him recover.
“I don’t know…” Hayden bit the inside of her cheek, worried.
“Really, Hayden.  You’ll do fine.”  He gave her arm a squeeze.
“Do you want a cookie, Uncle?  I found it in my pocket.”  Emma handed a sorry looking cookie down from on his shoulders.
Kendall took it.  “Thank you.  I’ll just put it in my pocket for later, alright, Sweetling?  I’d rather go into this with an empty stomach.”  He gave Hayden an encouraging look.  “Though I’m sure I’ll be fine.”
“Alright.  But you need to tell me the instant you start to feel sick.”
He nodded.  “Down you go, Emma.”  He squatted so she could climb down.  “Now, where would like me to stand,” he inquired as he stood.
“Why don’t you jump the creek and go stand by the woods.  I’ll try to displace you to this side of it.”
Kendall shifted and easily leapt across the flowing water.
A quarter of an hour later, Kendall found himself still standing by the woods, his arms at his side, his blue eyes gazing into Hayden’s green ones across the creek.  He could tell she was biting the inside of her cheek.
“Hayden.”
She blinked and took a step back.  “Are you getting a headache?  I can stop if you want.”
He shook his head.  “No, I’m fine.  I just don’t want you drawing blood on the inside of your mouth.”  He smiled.  “Take a deep breath and relax.  Don’t worry about me, a headache won’t kill me.  Just concentrate on the spell.”
She inhaled deeply and closed her eyes.  “Alright.”
Kendall watched as she mouthed the words she needed before pushing her energy toward him.  He felt the rush of magic wash over him, felt the ground disappear under his feet, and suddenly, he was free falling through the air.
“Great job, Hayden!”
Brice’s compliment sounded far away as he felt the grass reappear under him.  He blinked hard to get rid of the spots blocking his vision.  His gaze focused in time to see Hayden jumping up and down, clapping like a child.  He grinned despite the fact he could hear the blood pounding in his head.
“I barely felt that one,” he lied, knowing she was watching him to judge his reaction to the spell.  “Why don’t you give it another go?”
“Are you sure?”  Her initial excitement faded and she frowned, her eyes squinted with worry.
“I’m fine. Really.”
She took a deep breath and he tried to relax.
“Alright.  But just one more time.”  She waited until he nodded before inhaling deeply to focus.
This time, there was no waiting for the rush of magic.  Kendall grunted with the force with which it slammed into him.
What’s taking so long?  He was sure he’d never had to wait more than a fraction of a second before finding himself back on firm land.  Five, six, seven…
The ground rushed up under him once again and his legs buckled under the impact.
He groaned and held his pounding head.  He’d been wrong.  He could die from a headache. The 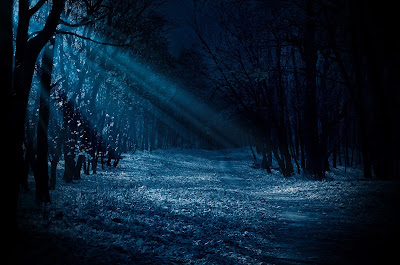 world took a wild spin and he rolled to his side in case he threw up.  His stomach churned, his heart pounded.  He kept his eyes closed, sure the pressure behind his eyes would force them out of their sockets.  It took a moment to realize he couldn’t hear Brice cheering and that Hayden still hadn’t rushed to his side to make sure he was alright.  He opened one eye at a time, hoping the sunlight wouldn’t make the pounding worse.  Why was it dark out?
“Bloody hell! What happened?”  He wrapped his arms around his knees and looked around slowly before attempting to stretch.  Why was he so stiff?  His formed blurred and he felt his bones move into their proper order as he shifted into his tiger.
Kendall took in his surroundings more closely.  Even with his feline vision, nothing looked familiar.  He shifted back.  “Not even a bit,” he mumbled to no one in particular.  “What kind of plant is that, do you suppose?”  He reached over to a large blue flower growing from the trunk of a light pink tree.  “These look like the pink trees in the Wedelven forest, but I’ve never seen flowers like these growing on them before.”  He jumped back with a growl as the flower bared teeth and attempted to bite his outstretched hand.  “By the moons!  It tried to eat me!”
He’d never heard of a plant like this one. His heart raced and he inhaled deeply a few times to try and focus.  What had happened?  Where was he?  And better yet, how was he going to get home?

That's it, Sweetlings!  Stay tuned for chapter two next week sometime!!
Posted by Mireille at 16:14