Teaser Tuesday (Crossover The Chosen One Trilogy:book one)

Whoa yeah!! That's two weeks in a row!  This week's teaser comes from Crossover, the first book in the Chosen One Trilogy.
Enjoy and stay safe!
:)  Mireille 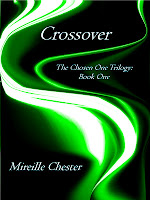 The following morning I woke to the noise of Tara and Ben making bets.
“I don’t know why you bother, sweets.  You know you’re going to lose.”  Tara grinned at him.
“You just wait.  Goop has been getting much quicker on his turns.”  Ben patted his deer between the eyes.
Tara shrugged.  “It’s your new bow.”
He laughed.  “It’s going to stay my new bow.  But can you bear to part with your emerald dagger?”
She snorted and made sure her saddle was on tightly.
“You’re going to want to see this, Shlova,” Jasper said as he took my hand and stood me up.
We followed behind the two of them as they led their deer a little way down the trail.
“I don’t know why they bother making bets.  They never do exchange prizes,” he laughed.
“So you know Tara and Ben from before?”
He nodded.  “I was doing some scouting along the Wedelven border when I came upon a lone Wedelve high in a tree.  She was surrounded by dogs and was casually taking them out, one by one, every time one would try to come up after her.”
Tara looked back and grinned.  “Jasper was nice enough to lend me a hand.  When we were done getting rid of them all, I brought him home so I could feed him a decent meal as a thank you.
I had just come back for a few days and when we got to talking, Jasper told me about being on the lookout for you, that the queen thought you might be coming back soon.  I had brought some pictures back, so I showed him the one of you.  I wasn’t sure if we were both talking about the same person.”
Jasper started to laugh.  “I fell off of my chair.”
“Literally.  He took the picture in his hand, his eyes got big and he stood up real fast, tripped on the chair and fell over.”
“I had been dreaming about you for two years prior to that day, but had always assumed you were probably at the castle and I hadn’t seen you yet.  When she gave me the picture and I realized that you were the one I was dreaming of, I have to admit, I was completely baffled.”
Tara laughed.  “He thanked me for his meal and left like his ass was on fire.  That was about four year ago.”
I smiled.  “You poor thing.  You must have thought it was a lost cause.”
He nodded.  “I did.  Not only was I fated to the one being who could save or destroy us all, she wasn’t even in this world!”