So, last night, I had a cookie before bed.  Yeah.  I know.  Big mistake.  Eating anything before bed guarantees I'll have at least one hell of a messed up dream.  So, here it is.  THE cookie induced dream.

I awoke this morning with a smile.  The night had gone well.  I'd gotten my required eight hours and the kids had slept through the night.  I stretched and sighed before getting up to get some coffee.  As the pot brews, I glance out the window to survey the back yard.  I frown.  Something seems different. I follow the movement of the flies and other insects as they move from grass blades to flowers. I can't shake the feeling that something is wrong. 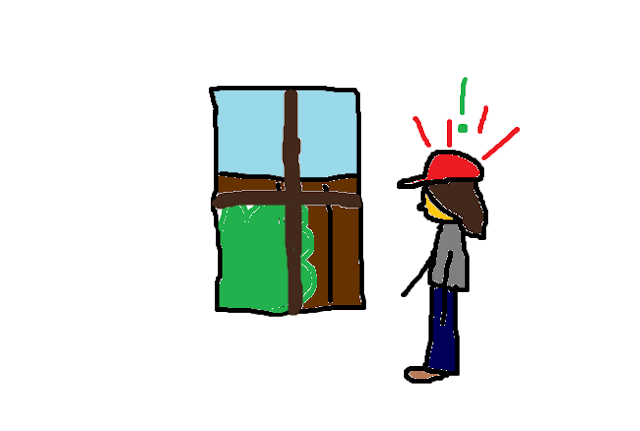 Ignoring the now finished coffee, I swing open the back door and freeze in shock. my back gate is wide open and everything is GONE! The shed, the table, the chairs, the garden decorations... Even all of my vegetables, flowers and bushes!  Gone!  My yard is now completely empty.  The only clue is a set of truck tracks in the snow.  Yeah.  Snow. 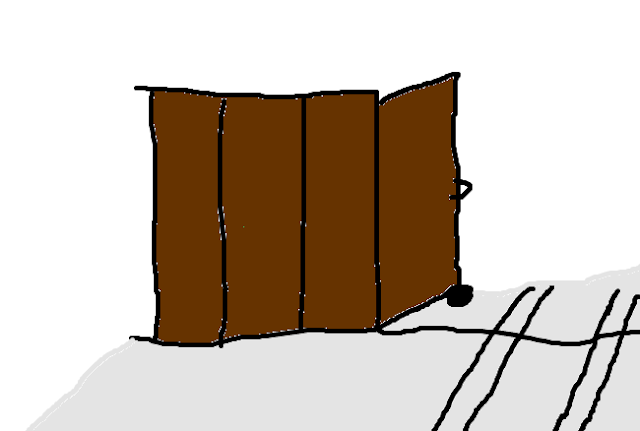 I pull out my phone and bring up my alarm app.  I'll have the bastards on video!  I scroll through the different clips and my stomach drops.  What the hell? Nothing! Not one clip that has any evidence of the culprit.  Just one that shows my yard gates start to swing open and the next a shot of them wide open and my yard empty. I turn the app off and run inside to check the app on my laptop.  There! There's a snapshot on the laptop that wasn't on my phone.  Weird.  My anger flares.  The photo managed to catch the back end of a trailer as it was leaving my yard.  And I know that trailer.

A holler outside sends me running back to the yard.  There, I can hear my neighbours yelling in anger. We all meet in the alley.

"Someone emptied my yard!" complains one.

"I have nothing left!"

"Who would do such a thing?"

Shelley smiles and holds out a freshly baked cake.  "Cake?"

"No, I don't want any cake.  I want my shit back.  And my neighbours want their shit back.  What the hell, Shelley!!" 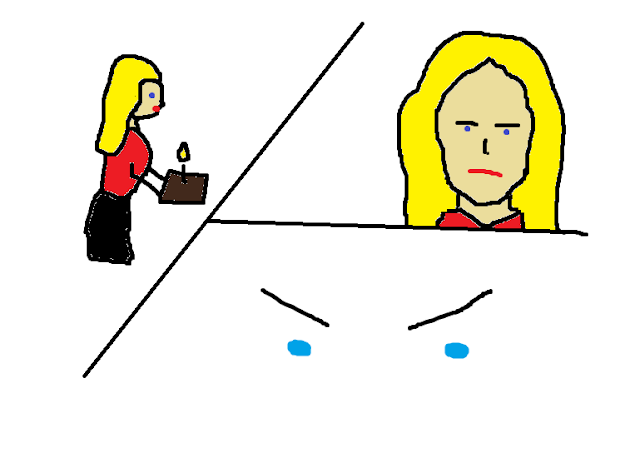 She pulls out a knife from under her cake and stabs at me while Chelsea laughs.  I counter by pulling my belt out of the loops on my jeans.  It turns into an electrified whip.  It sparks as it starts to rain in the living room.
"Why did you take it?"  I whip in her direction then pull back in an arc, aiming at my niece who has picked up a sword.  "What have I ever done to you?"
The pair have turned into half naked hairy fairies and their weapons have turned into wands. 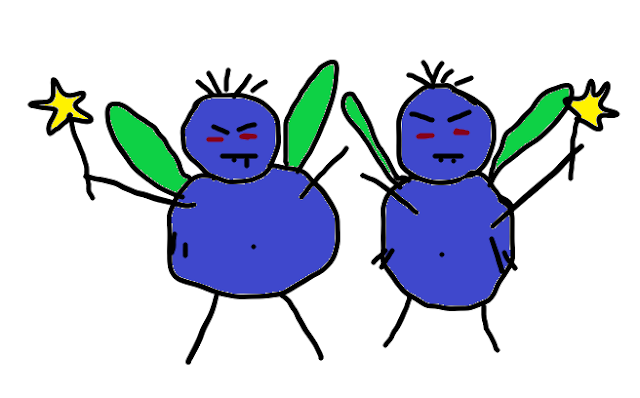 "Give us your teeth!"
"I don't friggin thinks so!"  I dash outside and find myself in a room with no furniture.  A large window takes up most of the far wall, though it is so dirty, I can't see through it.  The floor is covered in a layer of dirt so think it feels like I'm walking through snow.
Crunch.  I cringe.  What did I step on? Another step forward and another crunch.  I squat and run a finger through the dust, trying not to cringe. It comes into contact with something hard.  A rock?  I gingerly pick it up between thumb and forefinger.
"Oh, gross."  It's a tooth.  A molar.  I drop it back into its dusty resting place.
"That's my tooth."  An old, scrawny fairy sits up from under the dust. 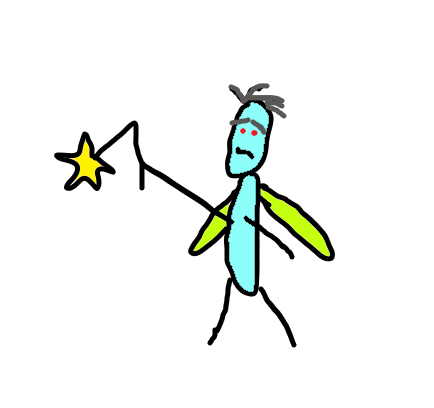 "All my teeth are here somewhere."
"Ummm..."
"It's alright.  When a tooth fairy starts to lose his teeth, that's the beginning of the end.  Soon they'll be dust and then it will be my turn."
"So, this dust is all fairy dust?"
He nodded.
"Gross."  I wrinkled my nose then caught myself.  "Sorry."  Fairy dust.  The word kept rolling around in my head.  "I wonder..."
I took a handful and sprinkled it over my head.  "Happy thoughts.  Think happy thoughts." 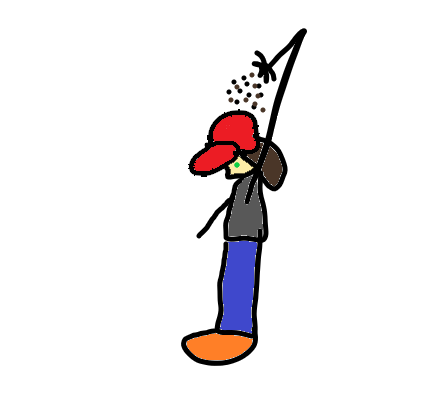 The old toothless fairy burst out laughing then was caught up in a fit of coughing and wheezing.  "Idiot."
"Shut up, Dusty."
He grumbled something I couldn't hear.
"How the hell am I supposed to get out of here?"  Despair was starting to set in.
"It's called a door."  He pointed behind me.
Not willing to have it disappear as quickly as it had appeared, I swung it open and dashed through. 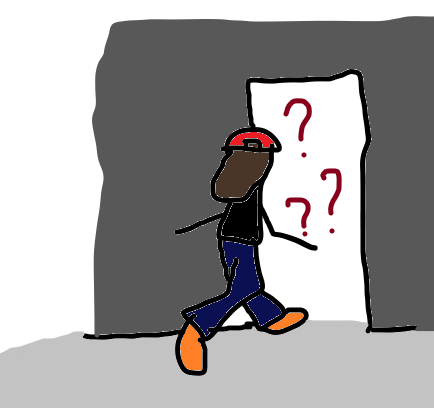 "Surprise!"
I stopped short, flabbergasted to find myself in my own backyard.  The grass had just been cut, the flowers had been freshly watered, and a bowl of fresh garden veggies sat atop my table.
Shelley stepped forward, cake in hand.  "Happy birthday!"
I laughed.  "Awww. Thanks!"  Pausing, I gave her the once over then moved on to Chelsea.
"What?"  My niece grinned.
"Nothing."
And with that, we all sat down to eat cake... which somehow ended up being a cookie when I put it in my mouth. 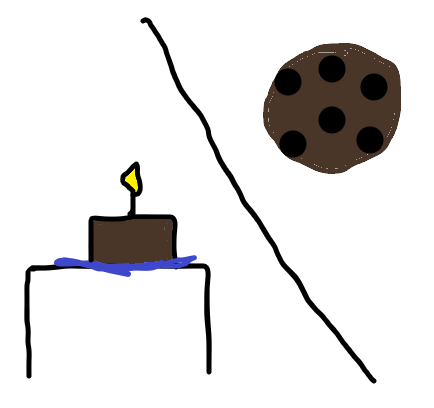 Until next time, remember: don't eat before bed!
Posted by Mireille at 20:18