As some of you have heard, I've been working on Displaced for the last little while.  When I released it a couple of yours ago, I shouldn't have.  For lack of a better word, it was terrible.  Now, don't get me wrong, I love the story and the characters, but they (and you) deserved better than the half-assed thrown together "novel" I put out there.  Thankfully, I was smart enough to hit the unpublish button almost as quickly as I pushed the publish one, and only a handful of people managed to read it.

So.  For those of you who love Quelondain and Hayden's Sageden pack, I want to thank all of you for keeping the faith you seem to have in me.

Here's a little something for you on this beautiful Sunday night.

Neeka shut her bedroom door as quietly as she could.  She’d managed to avoid her sister most of the day and had made sure to tend the bar as long as possible to make sure Hanna would be sleeping when she came to bed.
Her sister knew, she was sure of it.  The instant she’d walked back into the inn with her vegetables, her sister had known.  How, she wasn’t sure.  She’d sent Kendall to get water for the lunch soup, something they usually did together, but she’d had to put some distance between them.
She’d thought that being with him would cure her of the need she felt when it he was around.  She’d been wrong.  So wrong.  Had it not been for the fact that the vegetables had to be back in time for lunch, she would have spent the entire day exploring his body and all the different ways she was sure he could make her explode.
She lay on her bed and pulled the covers up.  Closing her eyes, she listened to her sister’s breathing.  Sleeping.  Taking a quick look to make sure the blanket that spread between them was in place, Neeka let herself think of the morning’s events.
Bloody hell.  What had she been thinking?  She was intended.  She hadn’t been completely sure he would take her, though she had been fairly confident he’d felt the attraction.
She had hoped that having him would satisfy her curiosity, her need to have him touch her.  If anything, it had combusted the urges and set her on fire.
It had been all she could do not to drag him back to the forest to have a second go at him.  Thankfully, he seemed to have been affected the same way.
There had been no hesitation, no question as he’d led up into the hay loft and bent her over a bale of hay.  The feel of him sliding in and out combined with her anticipation of how she knew he was able to make her feel had her cumming in a few short minutes.  He’d held her from behind, his lips dropping soft kisses on the back of her neck.
She’d giggled at his apology.  There was no need to be sorry.  She’d wanted it just as much as him.
If pretending she wasn’t interested in him prior to this had been hard, it was now nearly impossible.  She’d caught more than one of Christopher’s men eyeing them.
Maybe it was her overactive imagination, but she was sure everyone knew.
Her thoughts wandered back to the hay loft and her fingers traveled down to the heat that was rising between her legs.
The breeze had blown into the barn and she was sure he’d caught her scent.  His nostrils had flared, his light blue eyes locking on hers.  No words had been spoken.  One moment they were staring at each other, the next, they were in the loft.  His fingers had made quick work of the laces on both of their pants.  He’d pushed into her with a sigh that had her moaning.  He was perfect.  It was almost as though they’d been doing this every day for years.
She thought of how his thighs had felt on the backs of hers, how his hands had gripped her hips and pulled her back to penetrate her deeper still.
Her fingers pushed on her sweet spot and she clenched her teeth, desperate to stay quiet as she exploded in her memory and in her room.
She lay like a puddle of jelly in her bed, her breathing settling back to normal.  By the moons, what was happening to her? She’d lost her mind, to be sure.  She’d lost her bloody mind.

Posted by Mireille at 20:45 No comments: 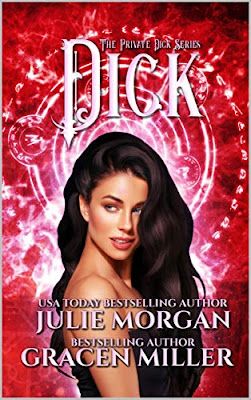 Bourbon, beads, and blood.KINGPhuck is the king of New Orleans. A demon who offers immortality for loyalty and respect. As president of the Voodoo Dawgs MC, he’s become as iconic to Nawlins’ citizens as the French Quarter. With Voodoo Mama and his brothers at his side, he’s untouchable, his power limitless. But when one of his demon brothers is discovered murdered, his life is about to be shaken up in ways he could’ve never anticipated.SHERIFFEnzo is a sheriff, a shifter with a badge, who’s lost his power and the respect of the citizens of New Orleans. Betrayed by those he trusted, he’s fallen into disgrace, unable to remain sober long enough to pull himself together. When one of Phuck’s men is found dead, Enzo calls in the big guns to help solve the murder.DICKPanther shifter Detective Natalia Cortes arrives to investigate a demonic killing in NOLA. It’s not just any homicide, but the murder of a demon who happens to be part of the Voodoo Dawgs MC. The self-appointed King of New Orleans doesn’t want her there, but she feels his heated gaze. The sheriff needs her help to solve the case, but the more time he spends with her, the more he wants to claim her as his mate.Welcome to the Dark Days and Voodoo Nights of New Orleans!


When I found out that Gracen Miller was releasing a new book, I knew I had to get my hands on it.  She's become one of my favorite go to authors.  She never disappoints.
Dick is a great story filled with action, romance, and fantastic sex scenes.  The characters a relatable and emotional.
Once I started reading, I couldn't put the book down.
Another five star story from an amazing author and her partner in crime. I'll definitely be looking into Julie Morgan and reading more of her stories.
Posted by Mireille at 07:15 No comments: