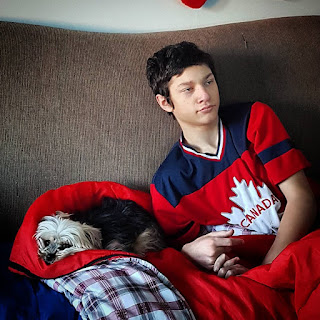 There are so many ways to feel tired.  Mentally, physically, emotionally, spiritually... being tired is never a great feeling.  When you're tired in all these departments, you're not tired anymore. You're exhausted.

Today, I woke up after two hours of sleep completely drained.  My body hurts, my head hurts.  My heart hurts.  I am without a doubt, exhausted.  I know a lot of people follow along with Anthony's story and while I always try to post positive, happy, and funny things, every once in a while, I'll pop a negative tidbit in there.  I mean, let's face it.  My kid has not just one, but three health conditions.  Life isn't always going to be roses.

About a month ago, Anthony started to have dizzy spells.  Some minor.  Some major enough he would fall and sometimes throw up.  We did some blood work, but his medication levels seemed to be where they were supposed to be.  The only thing out of the ordinary was a low white blood count. Now, before you panic, one of his medications can cause this.  It can also cause dizziness. Because his med levels were normal, his neurologist sent us to our family doctor (neuro is an hour and a half away in a different city) to get checked out.

One physical later, and Anthony was given a clean bill of health, minus the dizzy spells.  Our family doctor decided that the best way to rule out the carbamazapine was to lower the dose.  If he was suddenly showing two side effects of that medications he'd never experienced before, then maybe it was the culprit.  Of course, that meant that with a lower med level in his system, we'd have to watch for seizures.

I'm not going to lie.  I was hopeful.  I thought, well, if the medication is making him feel like this, then maybe he doesn't need to be on that high a dose.  Maybe the rest of the meds he was on were enough to keep the worst seizures away.

A week after we lowered the dose, the dizzy spells went away.  I thought, "Awesome!".

A week after that, and we started to notice small changes.  He had more trouble sleeping.  He was quick to get upset.

It's been one more week since that second week and there's no denying it.  He's having more seizures.  Not the ones where he loses conciousness and stops breathing, but the ones he has right before he has those bad ones. He's not sleeping because of them which leaves him exhausted and moody, and just not in a good place.  He has to stop what he's doing multiple times a day because of them.  There's nothing like your teenage boy yelling "mom" in a panicked voice as he runs to the nearest bed so he can lay down in case he falls.

It's been an exhausting month.  And yes.  I know I'm using that word a lot.  I'm too exhausted to think of a different one.

Last night, we gave him his higher dose of medication.

This morning, I woke up crying.  Because I'm tired.  Because I've only gotten a couple hours of sleep per night the past month.  Because now, Anthony is going to feel gross while his system gets used to the higher level of medication. Because it's going to take at least a week for the higher levels to help bring down the number of seizures.  Because, after all of this, was it even the carbamazapine that caused the dizziness?  Did I just put my son through three weeks of mental and physical hell for nothing?  I don't know.  I have no fucking clue.

In two weeks, we have an appointment in Saskatoon with his neurologist.  Maybe the dizzy spells will be back by then.  Maybe they're gone forever.  Until then, we'll just try to rest and stay positive.

Anyway.  That's my Anthony update for now.  And don't worry.  I'm sure something cute or funny will happen soon and I'll be sure to let you all in on it.