Tyler's Story is the first of my YA novels set in Quelondain.  I haven't written any more but no one needs to worry.  If you've enjoyed the Tales of Quelondain series  (of one book), there will be more. :D Until then, he's a bit of Tyler for you.
Enjoy and stay safe!
:)  Mireille 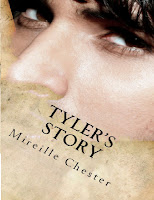 “Wait…”  Garry eyes were saucers in his head.  “You climbed in here?  On purpose?  Why the hell would you do that?”
“I came for Heidi and now that I have her, I’ve got to think on how we’ll get out again.”
A ruckus sounded behind them and everyone turned to see who or what was going to be coming out of the woods.
“There he is!  All humans who wish to live, get back in your tents!”  Vic glared at Tyler.  “You damn near broke my jaw, you bastard!”
“You’re lucky I didn’t kill you for putting her in here.”
If any of the humans had thought of hiding, their curiosity now had the best of them and they gaped at Tyler.
“She’s human!”  Vic said the word like it left a bitter taste in his mouth.
“And if I gave a damn about that, I’d have left her here!”  Tyler pulled his dagger and handed it to Heidi.  “I don’t care if they’re Maj or human, Heidi.  If anyone tries to take you, you cut them.”  He dropped his pack to the ground and stepped forward.
“You’re willing to die for her?”
“I’m willing to die for them.  This is wrong!  By the moons, you’ve put little ones in here!  If they’re rogues, then fine, but most of these just had the misfortune to cross over.”
“They’re human,” repeated Vic, as though this was enough of an explanation.
“Heidi, you remember what I said?”  He looked back to her when she didn’t answer.  She looked so scared.
“Tyler?”  Her grey green eyes met his.  “Thank you, for trying to help me.”  She bent down, took the dagger he’d given her out from under her pant leg, and tossed his back to him.  “Be careful, please.”  She swallowed hard and crouched down in a defensive pose.
He nodded and turned back to Vic.  “You don’t want to do this.”
“It’s five against one, Tyler.  Do you really think you can win?  I’ll make you a deal.  Come back out with us and I’ll let you visit her every other day.  Through the gate, of course.”
“How about I make you a deal, Vic.  Let all of us go and when I get out, I won’t go to Rainen to tell her what you’re doing here.”
The guards all gave a collective grunt.  Vic’s expression went from amused to unsure.  Heidi knew from having seen it that Tyler had just gotten that look in his eyes; the one that made her slightly afraid of him.
Tyler shifted and the humans who hadn’t caught on yet gasped at the sight of the large grey wolf now standing between them and the guards.
“Is he protecting us?” one woman whispered.
He launched himself at Vic with no warning.  Heidi screamed as four other dogs jumped on top of them.
“Tyler!”
A dog yelped and tears flooded Heidi’s eyes.  Another whine pierced the air.  This was quickly followed by a bellow of rage.  A coyote fell backward through the air, its throat slit.  Tyler’s thick frame emerged from the chaos.  He spun and drove his shoulder into a black wolf.  A fox clamped its teeth around his forearm.
Tyler’s eyes met Heidi’s as he was dragged back under.  He clenched his teeth to keep from crying out as the fox’s teeth ripped through the skin.
Heidi screamed something he couldn’t hear under all the growling.  He shifted and managed to clamp his jaws around someone’s leg.  Whoever had a hold of his leg let go and he was able to maneuver enough to clamp his jaws around Vic’s throat.  He pulled back with a few jerky shakes of his head and felt the blood fill his mouth.  Someone else screamed in pain and the coyote he was holding onto managed to free himself and run.
Tyler shifted back, searching for his dagger.  He couldn’t let any of them get back to the gates.  He couldn’t stop the whine as he turned into his wolf.  He pushed himself forward, chasing after the coyote.  The guard glanced backward over his shoulder and tried to pick up speed as the wolf caught up to him.  Tyler slammed into him with his shoulder, sending both of them crashing to the ground.  He slipped his hand into his pocket, pulled out the pocket knife he’d gotten from his aunt and uncle, and stabbed it into the man’s throat.
Tyler fell onto his back and tried to catch his breath.  Bloody hell, was Heidi alright?  He stumbled to his feet and ran back toward the camp, dragging his right leg.  His heart dropped at the sight of Heidi lying on her back, covered in blood.
“Heidi!”
A few of the people gathered around her cried out at the sight of him.  He ignored them and pulled her onto his lap.
“Heidi… come on, Heidi.  Speak to me.”  He brushed the hair out of her face and placed his lips softly against her forehead.  He swallowed hard.  “Heidi, please.”
His heart jumped at the feel of her fingers on his cheek.  “Thank the moons,” he whispered.  Heidi threw her arms around his neck and hugged him close.  Her sobs raked through her.
“Shush, now.  It’s alright.  I’m here.”
“I thought you were dead!”
He pulled back and smiled at her.  “I’m much harder to get rid of than that.”  He wiped the tears from her cheeks.