The Rustler's Daughter by M.E. Franco 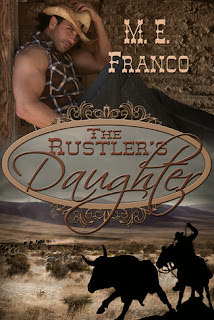 Blurb:
When Hannah Miller’s mother dies unexpectedly, she is forced to go live with her father, who she thought was dead. Hannah has high hopes that her father will be happy to finally meet her, but Roy Miller quickly puts Hannah in her place. She is a burden, just another mouth to feed, and an ugly reminder of the wife who left him.
Roy Miller’s act of desperation puts Hannah at the mercy of his enemies, the neighboring Scott family. Despite the bad blood between their families, Hannah is immediately attracted to Jackson Scott, but he has his own secrets and feels Hannah would be better off with someone else. When someone else does offer Hannah a way out of her predicament, will Jackson be able put aside his past and fight for the woman he loves?

Review:
Horses, cowboys, good old fashioned historical western romance. Yep, it was great. :) M.E.'s characters go through loss, love, and, true to her style, some very comedic moments.
So why did I love this book?  Well, three hot brothers, stubborn as hell women, emotions all over the spectrum... it's not hard to see why this is going to be a hit among readers.  I'm told we're going to see more from these characters and I can't wait!
I'm not going to say any more other than you need to read this... and M.E. Franco's Dion series.  (just saying)  :D
Posted by Mireille at 21:34